Theresa May Will Protect Workers' Pensions From Irresponsible Bosses 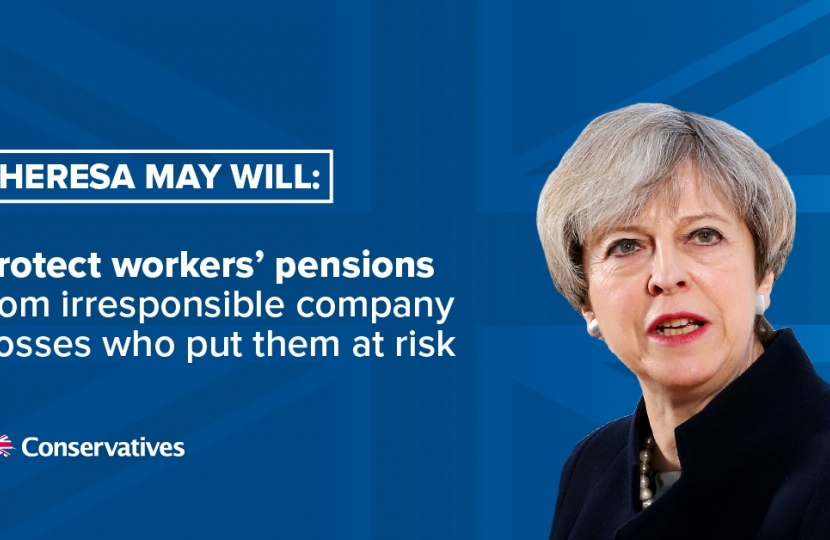 Prime Minister Theresa May has announced plans to protect the pensions of workers against irresponsible behaviour by company bosses.

This is bad for both workers and the market as a whole, and that’s why we will act. A Conservative Government led by Theresa May will give the Pensions Regulator the power to scrutinise takeovers and unsustainable dividend payments that threaten the solvency of a company pension scheme.

Under our plans, any company pursuing a merger or acquisition valued over a certain amount or with over a certain number of members in the pension scheme would have to notify the Pensions Regulator, who could then apply certain conditions.

In cases where there is no credible plan in place and no willingness to ensure the solvency of the scheme, the Pensions Regulator could be given new powers to block a takeover. This would include the power to issue punitive fines for those found to have willfully left a scheme under-resourced.

If fines proved insufficient, the company directors in question could be struck off for a period of time and a new offence could be introduced to make it a criminal act for a company board to intentionally or recklessly put at risk the ability of a pension scheme to meet its obligations.

In short we will tighten the rules on pensions during takeovers, and increase punishments for those caught mismanaging schemes.

This is all part of Theresa May and the Conservatives’ plan to build a stronger economy and deliver a more secure future for families across the country. This is the positive difference that only strong and stable leadership can make.

Unlike a coalition of chaos and instability led by Jeremy Corbyn, only a Conservative Government led by Theresa May can and will get on with the job of making life in the United Kingdom even better. And that means we are prepared to intervene when markets are not working for hardworking families.